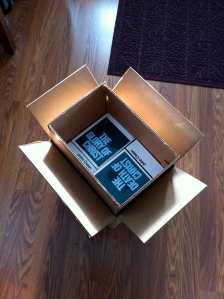 It’s the end of November. After many years waiting the great Puritan theologian John Owen finally moves into 501 Green. Got an amazing Christmas deal from Banner of Truth this year. I’ve picked up and put down the set at the Banner’s Ministers Conference each May, not quite being able to persuade myself that the discount was deep enough or my biceps sound enough to get the 16 volume set to my car.

This time the discount was deep enough and shipping was free. A quick swing and groan and they’re were inside the house from the front porch. When they arrived I quickly posted a Tweet and photograph. Then, after a synchronization between my iPhone and iPhoto, I spotted something I hadn’t noticed before. I have bought sets of great reformed protestant classics at the same time of year – the end of November. It must be the long cold nights ahead that turns my mind to deep reading:

Cracking open a volume of Owen for the first time this morning and thumbing through the crisp, new pages I came across this from The Glory of Christ (Owen Works 1:396) right at the bottom of the page:

There is a twofold coming unto Christ by believing. The first is that we may have life; – that is a spring and principle of spiritual life communicated unto us from him: for he is “our life,” Col iii. 4, and “because he liveth we live also,” John xiv. 19. Yea, it is not so much we that live, as he liveth in us, Gal ii. 19, 20. And unbelief is a not coming unto him that we may have life, John v. 40.

But, secondly, there is also a coming unto him by believers in the actual exercise of faith, that they may “have this life more abundantly,” John x. 10; that is, such supplies of grace as may keep their souls in a healthy, vigorous acting of all the powers of spiritual life. And as he reproacheth some that they would not come unto him that they might have life, so he may justly reprove us all, that we do not so come unto him in the actual exercise of faith, as that we might have this life more abundantly.

When the Lord Christ is near us, and we do behold his glory, he will frequently communicate spiritual refreshment in peace, consolation, and joy unto our souls. We shall not only hereby have our excited with respect unto him as their object but be made of his actings toward us in the communications of himself his love unto us. When the Sun of Righteousness ariseth on any soul or makes any near approach thereunto it shall find “healing under his wings;” – his beams of grace shall convey by his Spirit spiritual refreshment thereunto. For he is present with us by Spirit and these are his fruits and effects, as he is the Comforter, suited unto his office as he is promised unto us.

Can non-reformed Protestants claim this? Why wouldn’t they want to?

Today’s joy: Gaura lindheimeri on the coldest morning since 9 May. A gift from @bwtilton
Today’s joy: Mrs. Vicar’s gift of cut flowers from the garden to brighten my study.
Today’s joy: Nicotiana sylvestris (woodland tobacco) fills the evening air with a delicious perfume.
Today’s joy: Among the Salvia ‘Amistad’.
Today’s joy: Claire Austin. I’m very fond of this gentle ivory rose.
Today’s joy: the annual refresh of the variegated bark on our crape myrtle (Lagerstroemia indica)