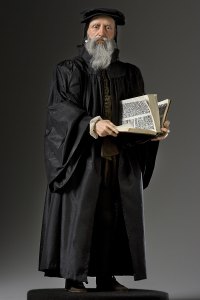 “Consequently, too, there comes in that which Paul quotes from Aratus, that we are God’s offspring [Acts 17:28], because by adorning us with such a great excellence he testifies that he is our Father. In the same way the secular poets, out of common feeling and, as it were, at the dictation of experience, called him ‘the Father of men.’ Indeed, no one gives himself freely and willingly to God’s service unless, having tasted his fatherly love, he is drawn to love and worship him in return” (Institutes, Book 1, Chapter 5, Section 3. Battles, p. 55)

There is something about slowly reading a book aloud. You are able to savor the development of the author’s argument. I use the method regularly in Bible study, but this is the first time I have done so with a familiar book. It is as though I am reading it for the first time.

What has struck me in section by section at the start of the Institutes is how spot-on Calvin is in his understanding of human psychology. I don’t think I appreciated this mark of his genius up until now. This passage I have quoted for you first got my attention in the quote from Aratus of Soli in Cilicia, the Greek poet and writer on astronomy that Paul quotes in his sermon at the Areopagus in Acts 17. I did not expect Calvin’s conclusion. Not just a proof of God’s providential care in the way he gifted humanity (Section 3 is where Calvin argues that humanity is the loftiest proof of divine wisdom), but in how this gifting is proof of His Fatherhood.

He is our Father. Calvin is clear that it is the experience of God’s fatherly love that draws us to love and worship Him.

I paused and reflected how my own return from the wilderness began in a refreshed understanding of God’s fatherly love. What made it so consequential for me can be explained by the way I had been shaped by my troubled relationship with my earthly father. Defenses had been carefully laid through the relationship I had with him. It was only when the absolute and utter grace of my heavenly Father’s love broke down the defenses that resisted Him that I was swept up into worship. God gently and relentlessly wore those defenses away as surely as the waves wash away the carefully constructed sandcastles of this momentary life.

Another gift of my heavenly Father: a way back to connect with my earthly one.

When you realize the depth of mercy you have been shown, extending mercy is just a short step. Much like the short, exciting steps we take as infants tumbling into our father’s arms.

How vital is a father’s role!