Funny the things that come into your head when the usual timetable of your day is put aside for a holiday. I realized today that I took my first course in ancient Greek (Koine) in 1976 and my first course in classical Latin in 1977. Latin would have beaten Greek to the starting block if my high-school had not discontinued its Latin program in 1971. I had enrolled in the summer but was told on the first day of school that it was no longer offered. Hebrew came eight and seven years later, in 1984, and has always remained a more distant third. 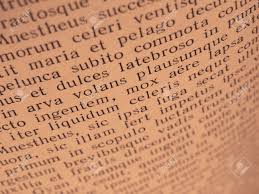 I have spent 40 years in Greek and Latin, still reading, parsing, speaking, studying, prose composing, and striving to better my grasp of them both every day. Some years more intensively than others, some years with more sweat and tears than others. There were many, very many alongside me who possessed a gift of fluency or continue to show a happy felicity with them, but I have met few who have pursued them with the same stubborn doggedness as me. I was and remain determined not to lose what I had worked so hard to gain.

My first Greek teacher was Dr. Ralph Beek at Northeastern Bible College. I missed the first two classes due to illness, but was there from then on, my copy of Machen’s New Testament Greek for Beginners open. One day before class he told a few of us that had studied classical Greek, not New Testament Koine. Before the bell sounded, he asked us if we would like to hear some Homeric Greek. What would you have done? We said, “Yes, please!” He then recited the prolog of the Illiad to us in beautiful dactylic hexameter. It was like being shown a secret door you never knew existed that led to a wondrous world.

Therefore, in honor of the anniversary I have named 2017 as my Latin Project year. I am called upon to use Latin more these days, so it is time to immerse myself in the language to increase mine fluency. I want to thank David Noe’s LatinPerDiem that showed me the way forward. David, the brilliant host of LPD, offered a summer reading group this year through Google Hangouts. About ten of us gathered from all across the States and Canada to participate. I enjoyed it and looked forward to every week, except one. He insisted that one discussion session would be entirely in Latin. We were not just to read, we had to give our answers and questions in Latin. I dreaded what was coming, but to my surprise, I found it fun. Encouraged, I began to prepare my project. I discovered that to gain the level of fluency I desire, the recent studies by the Extensive Reading Foundation applied to Latin were the way to go. Justin Slocum Bailey explains it all in this Paideia Institute video: Savvy Autodidact. The workbench is ready, the tools are laid out. The reading strategy is in place.

Finished a Christmas gift on the Eve of Candlemas. It was an excellent and accessible read by @michaelrosarian
Today’s joy: Mahonia, the first to flower in 2023’s gardening year. The earliest it’s ever flowered. I caught its citrus scent before I spotted the blooms.
Happy New Year from all of us. Today joy: Cornus sanguinea ’Midwinter Fire’
Trowel down, worship services done, and a very special St. Stephen’s Day luncheon with our family. What fine men our sons have become.
St John the Evangelist, Little Gidding. Photo by John Salmon.
Winter solstice 2022. Here’s a joy from Summer solstice 2022: David Austin rose ‘Lady of Shalott’.