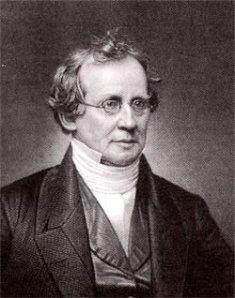 I have just put down a very well-written biography of Charles Hodge. He was the principal Reformed theologian of Princeton Theological Seminary for over 50 years. Irenic and ecumenical, influential Episcopalians John Johns and Charles McIlvaine were Hodge’s lifelong friends.

There is much to commend the biography to you. You really get a sense of the man, the theology, and the era. Biographer Paul Gutjahr has spent ten years in writing this. It shows up on every page. As an example, I was particularly moved by this touching description of Charles Hodge with his fifty-one year-old dying wife Sarah:

The next death that visited Hodge was infinitely dearer to him. On Christmas Day 1849, just four months after her return to Princeton with her daughter and grandchild, Sarah “softly & sweetly fell asleep in Jesus.” She most probably fell victim to uterine cancer.

Sarah’s health had begun to deteriorate soon after her return, and by December her condition was such that Hodge had lost all hope of recovery. In her final weeks, he personally nursed Sarah, spending countless hours simply lying next to her. During these times, he held her hand, and conversed with her when she had the strength. The depth of their love remained so intense that Hodge later commented that “to the last she was like a girl in love.” During her final weeks, Sarah asked Hodge to tell her in detail “how much you love me,” and they spent time recounting the high points of their life together.

Hodge’s last hours with his wife were particularly poignant. As her life ebbed away, Sarah looked at her children gathered around her bed and quietly murmured “I give them to God.” Hodge then asked her if she had thought him a devoted husband to which she replied as “she sweetly passed her hand over” his face: “There never was such another.” (Charles Hodge, 258)

I am planning to return to Princeton October 21 to search out Hodge’s grave. His remains are located in Princeton Cemetery, not far from other of my Reformed heroes: Jonathan Edwards (yes, the Jonathan Edwards!), B.B. Warfield, and Archibald Alexander. That will just leave Gilbert Tennent in Abington and the cenotaph of Theodore Frelinghuysen in North Brunswick to finish my Great Awakening pilgrimage begun in 2009.

Finished a Christmas gift on the Eve of Candlemas. It was an excellent and accessible read by @michaelrosarian
Today’s joy: Mahonia, the first to flower in 2023’s gardening year. The earliest it’s ever flowered. I caught its citrus scent before I spotted the blooms.
Happy New Year from all of us. Today joy: Cornus sanguinea ’Midwinter Fire’
Trowel down, worship services done, and a very special St. Stephen’s Day luncheon with our family. What fine men our sons have become.
St John the Evangelist, Little Gidding. Photo by John Salmon.
Winter solstice 2022. Here’s a joy from Summer solstice 2022: David Austin rose ‘Lady of Shalott’.