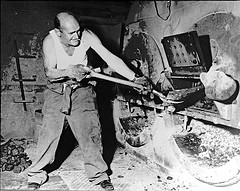 The Diocese of New Jersey elected its 12th Bishop on May 4th. Although the progress of the election and ballots fell out exactly as I had described it in our parish open forum, the Bishop elect was relatively unknown to me. So when I returned home and after a well-earned mug of tea, I had a read/listen to about 6-7 of his most recent sermons from his church’s website to get a sense of his theology and teaching. After hearing him preach I thought it would be good to “stoke” the boiler, as it were. To do that I had to return to Garry Dorien’s magisterial work for a refresher on what is liberal theology.

Gary Dorrien is an Episcopal Priest, a professor at Union Theological Seminary, and the foremost expert on American liberal theology, explains:

Before the modern period, all Christian theologies were constructed within a house of authority. All premodern Christian theologies made claims to authority-based orthodoxy. Even the mystical and mythopoetic theologies produced by premodern Christianity took for granted the view of scripture as an infallible revelation and the view of theology as an explication of propositional revelation. (The Making of American Liberal Theology: Imagining Progressive Religion, p. xv).

Dorrien goes on to say that later “Reformed, Lutheran orthodoxy, and my own Anglican tradition heightened the Reformation principle that Scripture is the sole and infallibly sufficient rule of faith, teaching that scripture is also strictly inerrant in all that it asserts” (p. xv). He further argues that Roman Catholicism and Eastern Christianity were all based on external authority in their own ways as well.

But liberal theology, which Dorrien believes to be “the most creative and influential tradition of theological reflection since the Reformation,” charted a different course. Liberalism is both a tradition, coming out of the late-18th century Protestant attempt to reconfigure traditional Christian teaching in the light of modern knowledge and values born in Enlightenment Deism, and a diverse, but recognizable approach to theology.

Specifically, liberal theology has these characteristics:

It’s important for evangelical Anglicans like me to be reminded what liberal theology is because our first principles, our meaning and our theologies are miles apart. We want to understand it accurately, deal with it fairly, and recognize that some Christians embrace the theology naively without embracing the term because of what they have been taught by generations of liberal clergy that occupy Episcopalian pulpits.

We must also teach our people to recognize when a liberal uses a Christian term or symbol, it has been radically reinterpreted to mean something completely different from what orthodox Christianity asserts as it meaning. Indeed, scholars closer to the period who had themselves been students in Germany, when there were not the clear-cut lines between Christian and liberal, asserted that liberal theology was not Christian theology at all. There were two radically different assumptions at work: the naturalistic assumption of the liberal v. the supernaturalistic assumption of the Christian.

But manifold as are the forms in which the movement appears, the root of the movement is one; the many varieties of modern liberal religion are rooted in naturalism–that is, in the denial of any entrance of the creative power of God (as distinguished from the ordinary course of nature) in connection with the origin of Christianity. Christianity and Liberalism (p. 2).

Why was such an assertion made? because “…it may appear that what the liberal theologian has retained after abandoning to the enemy one Christian doctrine after another is not Christianity at all, but a religion which is so entirely different from Christianity as to belong in a distinct category.” (pp. 6-7).

2 thoughts on ““Stoking” the boiler”